A geothermal heat pump (also called a ground source heat pump) transfers heat between your home and the ground. Traditional air conditioners use the outside air to heat and cool your home. Geothermal pumps are typically more efficient and less expensive to operate than traditional air-source heat pumps. Initial installation is much costlier, but the Department of Energy reports that consumers can recoup those savings within five or ten years. 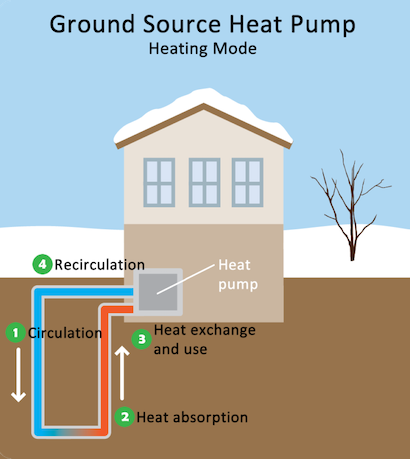 The Scoop on Geothermal Pipes

Geothermal pipes can be installed in one of four designs, depending on the size of your yard, soil conditions, and access to water.

This is one of the least expensive configurations of geothermal pipes. The pipes are shallowly buried – about seven or eight feet deep. The loops coil horizontally across the land. Because it’s a horizontal configuration, it requires a significant amount of land, typically over an acre. This setup is ideal for areas with high moisture content, but not optimal if your top layer of soil is dry sand or gravel.

A vertical closed loop has geothermal pipes that are coiled vertically rather than horizontally. You may not need as much piping, since ground temperatures become more consistent deeper in the earth. However, they are more difficult to service and costly to install, since they are buried more deeply.

This type of loop is only possible if the geothermal pipes can be submerged entirely in a body of water, like a lake or pond. Instead of burying the pipes in the ground, one supply pipe leads to the body of water. The coils are looped underwater rather than in the ground. Any installation contractor should be experienced in this unique type of installation. It may require permits or approval from environmental authorities to build a lake or pond closed loop system. If this type of system is available, it is typically the least expensive option as there isn’t as much digging.

An open loop system connects geothermal pipes to a well. Heat is extracted from the well water rather than the ground itself. The well water is pumped to the heat pump via a supply well, and then returned to a second well. This type of system is rarely ideal because it requires additional pumping power if the well is particularly deep. You also need to make sure your heat pump is regularly cleaned of minerals found in the well water.

Is a Geothermal Heat Pump a Good Choice?

It depends. If you have a lot of land or a big space to heat and cool, a geothermal system can give you a quick return on your investment. They’re environmentally friendly and have a long life expectancy. But they can be expensive to install and repair, so they aren’t a top choice for homeowners in the United States – yet. These quiet, invisible powerhouses are already popular abroad. With new tax credits, demand for the technology is expected to boom in the coming years.

Want to learn more about geothermal pipes and heating systems? Call a Newcomb and Company technician, and we’ll answer all of your questions.

DOES YOUR HOME NEED AN AIR CONDITIONING REPLACEMENT?

HVAC SHORT CYCLING AND OTHER SIGNS YOUR AC IS FAILING